The use of styrofoam has become extremely widespread all over the world, therefore it’s almost impossible to avoid it completely. Styrofoam is pretty versatile and can be used for many different purposes.

Most people know little about this material and when they get their food or beverage in a styrofoam container, many of them have no idea whether it’s safe to put in the microwave.

If you’re wondering whether you can microwave styrofoam, you’re at the right place. In this article, you’ll find all the information you should know about styrofoam so you’ll have up-to-date answers to your questions and concerns.

Can you microwave Styrofoam? Here’s a quick answer:

In general, it’s not recommended to microwave styrofoam unless the label says otherwise. Microwaves warm up the food that transmits the heat to the styrofoam container. As a possible consequence, styrofoam may release chemicals into the food that might lead to certain health issues. Much depends, however, on the temperature, fat content, and acidity of the food you put in the microwave.

What Exactly Is Styrofoam, Anyway?

Styrofoam is a trademark of the Dow Chemical Company and it’s basically extruded polystyrene foam (XPS). It has a light blue color and it’s widely used for building insulation (1).

Well, your doubts are totally legitimate: in the U.S. and Canada, the word styrofoam usually does not refer to the original XPS but to another similar material: expanded polystyrene (EPS) foam.

In contrast to XPS, EPS foam is white in color and is mostly used in take out containers, disposable plates, and coffee cups. Polystyrene (PS), the main component of EPS, is basically a form of plastic that’s made up of multiple chains of styrene molecules. Bottom line: EPS is not the same as Styrofoam (XPS), although most of us refer to it this way. EPS is the material you’ll find in many disposable coffee cups and it’s also widely used for food storage purposes (2).

Now that we’ve clarified what we mean exactly by styrofoam, let’s see what happens when you put it in the microwave.

How Does Microwave Heat Up Styrofoam?

We all know that there are materials you mustn’t put in the microwave, no matter what, because that could either damage the device or the object itself. Examples of such materials are stainless steel and aluminum.

What’s the reason behind this?

A microwave oven generates a type of electromagnetic radiation, called microwaves. They’re similar to radio waves but with shorter wavelengths and higher frequency (3).

Microwaves are generated at a frequency of 2450 Mhz (that is equal to a wavelength of about 4.82 inches) by a so-called magnetron (that’s basically a vacuum tube) inside the microwave oven (4).

When you place something in the microwave oven, the components of that object will probably interact with the generated microwaves: certain molecules, such as water, fat, and sugar, absorb them, while others, such as metal, do the exact opposite: reflect them.

Microwaves are capable of transmitting thermal energy, so they can quickly wamp up your coffee, food, and indirectly your styrofoam container too.

On the other hand, leaving a metal object in the microwave, while there is nothing that could absorb the reflected waves, can cause arcing between the microwave case and the object. This phenomenon can damage the device and eventually lead to a fire.

And now let’s take a closer look at exactly how microwaves interact with styrofoam.

Interaction Between Styrofoam and Microwaves

As we’ve already discussed, what we call styrofoam is actually expanded polystyrene foam. This material is a type of plastic, that is to say, it’s made of natural gas and petroleum byproducts. During the expansion process a blowing agent, such as pentane, is used to produce the end product (5).

Styrofoam is extremely lightweight: it’s more than 95% air (6). The rest is plastic and that is the part we’ll have a closer look at.

So what effect do microwaves have on styrofoam?

Styrofoam does not contain water and other molecules that absorb microwaves. Thus, microwaves usually won’t heat up styrofoam directly. However, that doesn’t mean that a styrofoam container can’t be warmed up or even melted in a microwave oven.

Food or drink can easily heat up any styrofoam container in the microwave indirectly by conducting heat.

So microwaves in themselves don’t have a very significant effect on styrofoam but heat transmitted by food or beverage does.

There are concerns regarding leaching various chemicals (especially styrene) into the food from styrofoam products.

Many sources mention styrene (the component of polystyrene) as a potentially dangerous substance for human health.

When exposed to high temperatures, styrofoam may melt and that could lead to the release of styrene (8). However, it’s not clear if that happens (or if so, to what extent) at temperatures you can find in a microwave.

Many scientists and studies claim that styrene is potentially harmful and it may cause cancer and other health issues (9, 10). According to the National Institute of Environmental Health Sciences styrene is “reasonably anticipated to be a human carcinogen”, however, we still only have limited evidence (11).

So what could happen if you put your styrofoam take out box into the microwave to reheat food?

Well, it depends mainly on the temperature and the fat content. The hotter the food, the more likely the styrofoam container (or plate, food tray, bowl, whatever) will lose its shape and leach some amount of chemical into the food.

On the other hand, styrene is fat and oil soluble, so the higher the fat content the more styrene you can expect to leach into the food. High acidity also increases the migration rate of styrene into food (12).

Can Styrofoam Cause Any Problem? Is It Dangerous to Your Health?

Well, we don’t have an exact and final answer to that question, however, there is an increasing number of studies that conclude that styrene leaching from disposable plastic food containers can negatively affect health (12).

However, it all depends on the dose and most symptoms were observed in people who worked in the plastic industry and were exposed to a much higher level of styrene than an average person. That doesn’t mean that you’re not at risk, especially if you use styrofoam containers regularly. 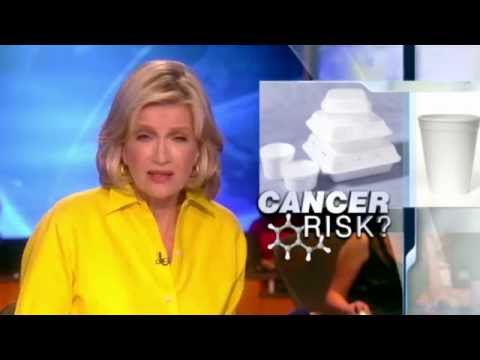 Therefore, in most cases, you’re better off not microwaving anything that isn’t considered microwave-safe (14). Most experts would agree that we do not have enough evidence yet to claim with absolute certainty that microwaving styrofoam is bad for your health in each and every situation. However, the data says that it might be the case.

I suggest you do not use any styrofoam (or any other plastic) containers, take out boxes, plates, bowls or cups in the microwave unless you can find the microwave-safe symbol or label on them.

Microwave-safe containers have met the FDA’s requirements, so they’re much safer to microwave than those without the symbol. FDA itself recommends only using plastic containers that have a microwave-safe label on them (15).

Many manufacturers produce microwave-safe containers and plates (such as Genpak or Hefty), however, double-check the labels before purchasing because a manufacturer usually has many product lines, and not necessarily all of them are microwave-safe.

Long story short, always check the symbols and labels on the product to make sure it’s safe to use in the microwave. Unfortunately, the symbols that indicate that a container is safe to use in the microwave can come in many different designs, such as the examples below:

Note that microwave-safe doesn’t mean that the container won’t leach any chemical: it only means that it’s tested and met the requirements of the FDA (16). If you want maximum safety, use glass or ceramic containers instead. Even a pure cardboard container is a safer alternative than styrofoam.

By the way, if you want to know what type of cardboard is safe to microwave, check out this article.

Why Is Styrofoam So Popular When It Comes to Food Packaging?

Besides being cheap, styrofoam has some unique properties that made it so widespread in the food industry.

Here are some of the benefits of styrofoam packaging that explain its popularity:

So, styrofoam has many advantages when it comes to packaging, however, it wasn’t designed to use in microwave ovens.

As you can see, styrofoam is probably not your safest bet if you want to use it to reheat your leftovers in the microwave. There are many concerns regarding the safety of styrofoam containers, although there’s no clear evidence that using them every once in a while will damage your health.

Also, keep in mind that the amount of chemicals that may leach into your food highly depends on the temperature and the properties of the food or beverage.

One thing is certain: it’s best to avoid using anything made of styrofoam in the microwave unless it’s labeled microwave-safe. If safety is a top priority for you and you don’t want to take any risk, don’t use plastic containers in the microwave, opt for ceramic or glass instead.