How Fast Can an Alligator Run on Land? (+Tips to Outrun It)

Alligators are one of the largest wild animals in the U.S. If you live in the southeastern part of the country, chances are great that you’ll cross an alligator’s path sooner or later. American alligators can grow up to 15 feet in length and 1,000 pounds in weight, so often they seem frightening at first (1).

Fortunately, most encounters end peacefully, however, you may wonder what to do if you bump into one of these creatures. And anyway, how fast are they? Do you have a chance to simply run away?

So, how fast can an alligator run on land?

An average size alligator can run as fast as 11 mph on land. However, the speed of an alligator depends on many factors, such as the terrain, air temperature, and the health status of the animal. Alligators don’t like running, so they rarely chase their prey on land, although they can be extremely fast within very short distances.

If you want to know how you can keep alligators out of your property, make sure you also read our article on the best methods here.

How Fast Do Alligators Run On Land?

There are only two species of alligators living on the planet and the American alligator (Alligator mississippiensis) is the only one that can be found in the U.S. So the following statements apply to all alligators that you can potentially bump into in the country (2).

According to Livescience, alligators are capable of running on land as fast as 11 mph (3). The experts of the University of Florida claim that alligators can run on land at speeds of 7.5 to 9 mph (4). The vast majority of reliable sources mention speeds up to 11 mph, so we can assume that this is the maximum speed at which alligators can move on land.

Of course, the maximum speed of an alligator depends on many different factors: the age and health status of the animal, the air temperature, and the terrain. Reptiles, including alligators, are cold-blooded animals, therefore their body temperature depends on the weather conditions. That’s why on a cold day they can be pretty sluggish.

Also, you can expect lower speeds from younger and smaller alligators. On the other hand, an extremely huge alligator on a warm day may run faster than 11 mph on flat terrain.

It’s good to know that alligators are not meant to run on dry land over longer distances. They’re very good at swimming and accelerating within short distances but they get tired very quickly on land (within about a few hundred feet).

Alligators chase their prey very rarely. They usually hunt in the water and catch their prey in a single move. Running on land is not their style, except when they want to defend their nest or escape from a threat.

Never approach an alligator because it can be surprisingly fast within short distances. If you’re just about 8-10 feet away from a large alligator, it can easily catch you before you can realize what’s going on. You simply won’t have time to react.

Just have a look at the video below to have an idea of how unpredictable and fast an alligator can be within short distances: 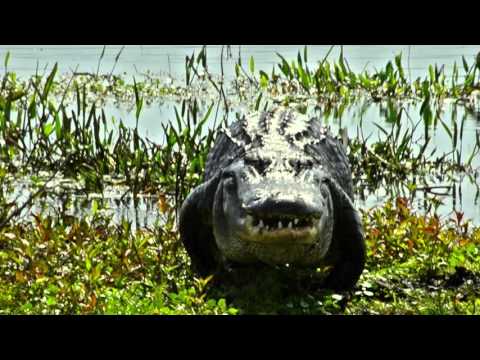 Can You Outrun an Alligator?

This is a very common and reasonable question. Now that we’ve discussed how fast an alligator can run, all we need to know is how fast a human can run. As you probably guessed, it depends on several factors, including age, gender, body size, and physical condition.

Based on data uploaded to the workout app Strava (more than 300 million runs!), the average running pace for men is 9:15, and for women, it’s 10:40 (5). That’s equal to 6.49 mph and 5.63 mph, respectively. However, these numbers apply to long-term runs. And, as we know, it’s not very probable that an alligator would chase you for miles because it gets tired way faster than you.

While every situation is different, we can assume that in most cases you have a pretty high chance of outrunning an alligator. So yes, the answer is that an average human can outrun an alligator. 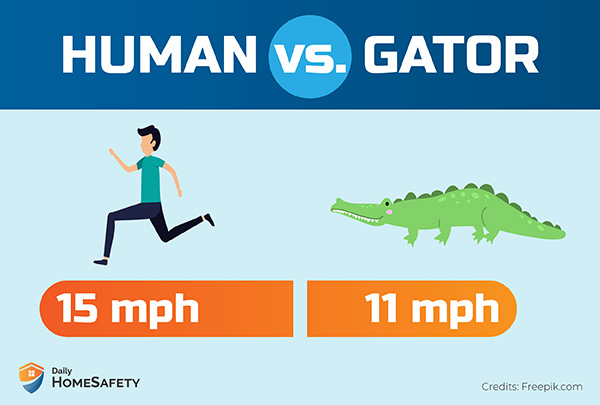 As I’ve already mentioned, alligators rarely attack humans on land if they’re far enough. However, if you approach their nest or get too close, you can get in trouble. Keep in mind that within very short distances alligators can move much faster than humans. Your reaction time won’t save you if you get too close.

Does Running In a Zig-Zag Increase Your Chances?

Let’s make it clear: if an alligator is chasing you, you should always run in a straight line as fast as you can. This way you have a real chance of outrunning it. Believe me, this is the best tip you can get.

Alligator Speed on Land vs Water

While on land you have a really high chance of outrunning an alligator, in the water the odds are against you. Alligators can swim at a speed of 20 mph, so they’re much faster in the water than on land (7).

On the other hand, the maximum speed that a human has ever reached swimming is 5.12 mph (8). Of course, an average person swims way slower than that. Therefore, while it’s true that you can outrun an alligator, you can’t outswim it, even if you’re the best swimmer on the planet.

If you live in a place where alligators are common (such as Florida or South Carolina), you have a pretty high chance of encountering one. So it’s good to know what to expect if that happens.

Alligators usually don’t chase their prey on dry land. So if you don’t approach them (or their nest), chances are great that they won’t attack you. An average alligator can run on land at a maximum speed of 11 mph. However, this speed applies to healthy animals and short distances only.

Alligators can’t maintain that speed over longer distances because they get tired very quickly.

An average human can run at a maximum speed of 15 mph, therefore most humans can easily outrun alligators. The best way to do that is to run in a straight line as fast as you can. If you run in a zig-zag, you just make it easier for the alligator to catch you.

Don’t get fooled by the numbers: alligators can be much faster than 11 mph within very short (a few feet) distances. Thus, never get too close to them because they can easily surprise you.