There are a bunch of things in every household that can easily catch fire if something goes wrong. Therefore, fire extinguishers are a must in every home no matter where you live (and they’re required by the law in many states): they can literally save your life in case of an emergency.

However, if you want to successfully stop a fire, you always want to make sure you use the right type of fire extinguisher otherwise chances are great that you won’t succeed.

Choosing between the different types of fire extinguishers might be a little daunting at first glance, however, it’s an extremely important step (and you’ll see that it’s not complicated at all).

In this article, we’ve collected all the information you should know about the topic so that you can make an informed decision when buying and always use the right type of device when it’s needed.

Types of Fire Extinguishers Based on Fire Classes

Class K (Class F outside of the US)

Carbon monoxide detectors are another type of essential safety device that you must have in your home. We have collected all the best places you should put them to work reliably in this article. Make sure you check it out!

This type of fire extinguisher (also called multi-purpose fire extinguisher) is the one that’s recommended for home use. It’s effective against all types of common home fires, including fires that involve combustible materials, flammable liquids, and electrical appliances.

Make sure you keep at least one ABC fire extinguisher on each floor of your house in an easily accessible location and also keep one close to the kitchen. When buying, make sure you choose a reliable model from a reputable manufacturer, such as Amerex or First Alert. 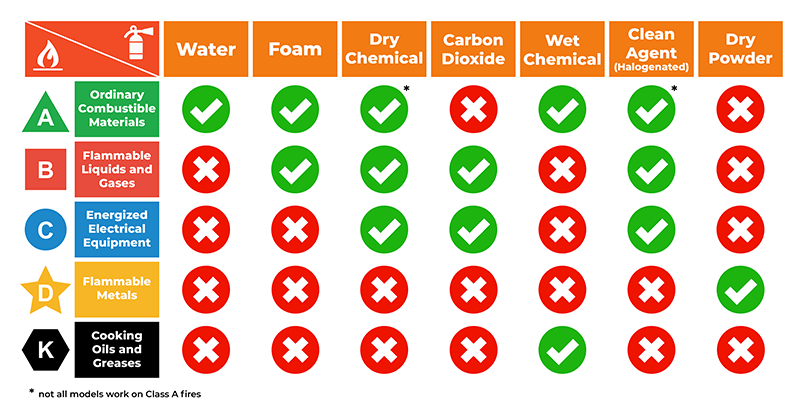 Water is a very common type of extinguishing agent that puts out a fire by separating the oxygen source (air) from the fuel source (burning material) and it also helps to take heat away from the fire.

Water fire extinguishers can only be used on Class A fires. You should never use it on Class B and C fires because it makes flammable liquids spread faster and conducts electricity, thus it can cause a life-threatening electric shock.

Fire extinguishers with foam are mostly water-based and they work on Class A and B fires. Besides having a cooling effect, they also create a barrier between the burning fuel and the air so they effectively shut off the oxygen supply to the fire.

Foams can be used on burning spills or to prevent ignition. As opposed to a water stream, fire extinguishers with foam won’t splash the burning liquid, instead, they form a blanket on the surface and smother the flames. One of their advantages is that they don’t leave any powder residue.

Dry chemicals are inert substances that effectively stop the ongoing chemical chain reaction. They cut off the oxygen supply and smother the fire. They’re electrically non-conductive so they work on electrical fires but may damage sensitive appliances. Their major disadvantage is that they always require cleanup after usage.

Carbon dioxide is a gaseous, odorless, electrically non-conductive fire extinguishant. It creates a layer of dry ice on and around the burning material. Dry ice is visually similar to fog, however never try to touch it because it may cause frostbite. It works by cooling its surroundings and removing the oxygen molecules from the system.

Carbon dioxide fire extinguishers can be used on Class B and C fires. They’re environmentally safe and leave no residue behind, therefore they are often classified into the clean agent group. However, keep in mind that they work only within short distances, usually between 3 and 10 feet (source).

Wet chemical fire extinguishers are mostly used in commercial kitchens and restaurants. They’re made for Class K fires (although they also work on Class A ones). That being said, fires in cooking oils and grease can be effectively put out with wet chemicals, such as potassium acetate.

Wet chemicals create a soapy foam on the surface of the flammable liquid that acts as a barrier between the fuel and the oxygen molecules in the air. Furthermore, they also have a cooling effect on the burning oil or grease. Note that it’s recommended to ventilate the room after using a wet chemical fire extinguisher because toxic fumes may form during the process.

This type of fire extinguisher is a perfect choice when you need to protect valuable and sensitive appliances and assets because halogenated agents won’t damage them by leaving residues (so no cleanup is required after using them). They work on Class A (not all models), B, and C fires as well. Clean Agents provide an environmentally friendly solution as they usually have a short atmospheric lifetime.

Dry Powder fire extinguishers are recommended to use only for Class D fires (combustible metals). They usually contain sodium chloride, finely divided graphite, or copper. When exposed to heat, these extinguishing agents form a crust on the surface of the burning metal that blocks the oxygen supply of the fire and they also absorb the thermal energy.

Dry Powder fire extinguishers leave residues behind and require thorough cleanup. If you have to use them in an enclosed space, be careful not to inhale the powder.

What Type of Fire Extinguisher Should You Have in Your Home?

In most cases, multi-purpose ABC (2A:10B:C) fire extinguishers are the best choice for home use. They offer an all-in-one solution and make it unnecessary to keep a separate type of fire extinguisher for each class of fire.

Before buying a fire extinguisher always read the label to make sure you choose the right type of device. Also, make sure you read and follow the manufacturer’s instructions.

Make sure you also check out our best fire safety tips for seniors here.